Most people I’ve spoken to who are opposed to using Sul have a misunderstanding of what it is. They demean it as not being a good ready position and/or that you are pointing your own weapon at your junk.  Those statements show that they have a different idea of where and when the position is used or what it is for.

The Sul position was never intended to be a “ready” position. It would be better described as a “safety” position. That seems to be the part that some people misunderstand and therefore, demonize the Sul.  When people say things like “That position does not keep your weapon in a ready state to fire” I would agree. That’s not what it is for. Or “I don’t want to point my gun at my nuts.” Again, I wholeheartedly agree, and if you’re pointing your gun at your nuts, or any other body part, you’re doing it wrong.

Let’s look at the origins of this controversial position and we can better understand its value. Max Joseph and Alan Brosnan were in Brazil training cops. When the cops deployed from vehicles, they had no muzzle discipline and were lasering everything in their environment, including each other and the instructors.  Not wanting to get shot by their students, Joseph and Brosnan came up with a way for the cops to hold their weapons in a safe manner when they had them out of the holster. They called the position “Sul” because it is Portuguese for “South” and the people they were training speak that language.

The Sul should be used to hold the weapon in a safe position when your gun is out of the holster and you are not actively searching or pointing your weapon at a suspect.  As an example, if you and your partner are searching a house, you would likely have your weapon at a ready position. If your partner has to pass in front of you for some reason, you can go to Sul, allow them to pass and then return to a ready position.

I have used the Sul position numerous times on the street. For example during an officer involved shooting at a busy campground, I had to work my way through the crowd of innocent campers who had begun filling the area.  I had my pistol out and at a Sul position; once I got through the crowd and identified the suspect, I then switched to a ready position.

One other complaint I’ve heard about Sul is that it “breaks the 180”. This argument is usually either from competitive shooters or outdated instructors who still have a square-range mentality. While the need to maintain the 180 rule for competitive shooting is understood, the other is simply arcane and should be discounted. There is no “Down Range” in real life. Instructors who are training personnel to use weapons in real life situations, whether they are military, law enforcement or armed civilians MUST create as realistic a training situation as possible.  Using the Sul on the range not only creates a 360 degree operating environment but trains personnel in proper gunhandling techniques for crowded environments. As for the competitive shooting arena, if you go to Sul and start pivoting to the rear after completing an IDPA stage, you can expect to be DQ’d and probably asked to leave. 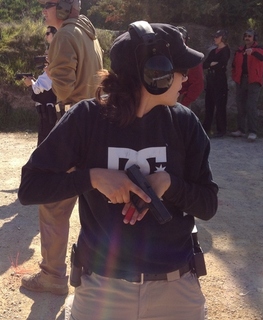 The most common time we encourage the Sul position is when conducting what is commonly called an “After Action Drill” as you scan for other threats and check your 6. It allows you to freely move in a complete 360 if needed without pointing your muzzle at everyone and maintaining control of your weapon.  When training on the range, I have seen numerous people who are not familiar with Sul leave their weapon extended and pointed down range as they scan. This leaves the weapon exposed as the shooter does not have good control over it and is not even looking the same direction the gun is. Even with a two-handed hold on the weapon, it is not as secure as it would be if held in front of the shooter. I refer to this as “Leaving the gun”. When you leave the gun, you are not ready to prevent an attempted takeaway or address additional threats.  If, during the scan another threat is identified, leaving the gun puts it in a position where it cannot be quickly brought into the fight to address that other threat. Using Sul ensures the shooter does not leave the gun, can properly scan the environment and if a threat appears, their gun is in a position to quickly mount and fire. I tell my students to use Sul so they can take their gun with them and not leave it behind.

Another time Sul is used often is while shooting courses of fire that require movement up range or laterally. In the old days, shooters were required to the keep their weapon pointed downrange at all times. If running a combat style course this would result in them leaving the gun by pointing their weapon downrange and running/moving in the opposite direction. Clearly such gunhandling teaches bad tactics and is unrealistic when compared to real-life situations people may be faced with. Including the Sul position in your training offers your personnel a safe and effective way to hold their weapon while moving. This will allow you to train for the 360 degree environment of life rather than stick to square range thinking. 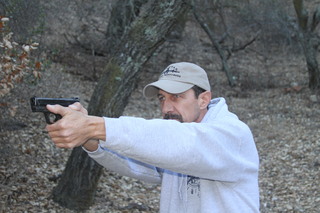 We have modified it slightly from the original position invented by Joseph and Brosnan. Here’s how we teach it: Start at the ready position of your choice. To obtain the Sul position, you simply place the tips of your thumbs together and rotate the weapon back towards your torso. 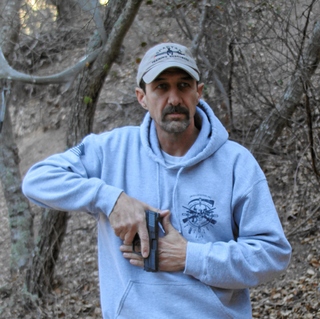 If standing still, the muzzle of the weapon is pointed straight down between your feet. If moving, we like to point the muzzle just to the outside of your support side foot. This allows you to walk or run without lazering your legs and feet. 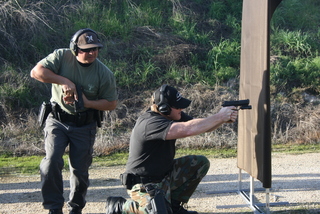 Also, if you keep your primary side elbow up, it helps keep the muzzle from drifting upward where it could end up pointed at people when you do not intend to do so. On the elbow position, some will say it is a bad tactical move because with your elbow up, you will expose it while slicing the pie around a corner.  With this I agree, and if you’re in the Sul position while clearing a corner, you are misusing the position.

Another slight modification is that rather than lay your support side hand completely flat against your body, you can arch it slightly so the muzzle is pointed down directly in front of you rather than directly between your legs. With the muzzle pointed either directly in front of, or directly to the side of your support side foot, you create a “Safety Circle” where the muzzle will not cover anything you are not willing to destroy unless it enters your circle. That safety circle will extend 360 degrees around you with a few inches of your feet. 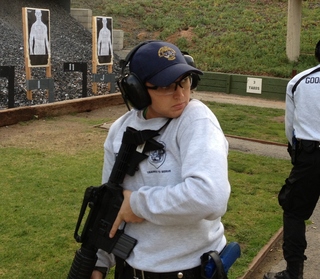 We can also apply the concept of Sul to handling long guns. This allows the shooter to maintain the weapon close to their body, scan, navigate tight spaces and still be able to quickly mount and fire the weapon. For Sul with a long gun, the shooter simply depresses the muzzle either between their feet or to the outside of their support side foot and allows the toe of the butt stock to come off the shoulder.

One way to emphasize the correct use of Sul is to incorporate it into courses of fire.  You can do this by setting up portable target stands, cones or other obstacles and designate them as friendlies/no-shoot targets. Have the shooter draw their weapon and negotiate the crowd at Sul while giving verbal commands. When they emerge from the crowd, they go to a ready position and shoot the course.  This is a simple and effective way to ingrain proper use of Sul and can easily be added to courses of fire you already use.

When we train people to shoot, we teach them proper grip, stance and marksmanship fundamentals. When we teach people to fight they learn proper stance, foot movement and striking techniques.  Why then when we teach them to have good muzzle discipline would we not show them a technique for doing so? If we understand the proper use of Sul and train our personnel to use it as intended, it is a valuable addition to our tactical tool bag.

John Marrs is a Sergeant with the San Luis Obispo County Sheriff’s Office with over 25 years of service. A prior SWAT operator and Team Leader, he serves as a Firearms Instructor for his agency and a Regional Training Site Basic Academy. He is also the co-founder of Spartan Training Resources. Marrs is a graduate of the California POST Master Instructor Development Program.  He also retired from the California Army National Guard as an Infantry Captain.