Hey everyone! I know that Spring seems like it is a million years away, but it's actually right around the corner! TEAM CPD is running and walking this year's Bank of America Shamrock Shuffle on 10 April, 2011 in honor of our fallen Police Officers and Firemen from 2010. We have a goal of 550 participants, one for each of CPD's fallen officers. As of today we have 160, so we have a long way to go! Please consider running or walking with us and spread the word! We have multiple weekly…

What is going on with Boots? One of the most important things about my uniform which I have spent countless hours researching is the boots I put on my feet every day to hit the streets. I have purchased boots for numerous reasons, because they are waterproof, insulated, have a knife attached, or simply because they look cool. Im am SOOO tired of wasting my time and money. I need something lightweight, durable, and most importantly comfortable. Wish I could wear gym shoes with my uniform but…

Hello All, please come by and visit the International Tactical Officers Training Association's booth #26307 if you are in Vegas, January 18-21!

In regard to your fitness and nutrition routine, I say SUPPLEMENT. My latest favorite pre-workout supplement is Jack3D. If you are feeling tired or less than enthused about hitting the gym then Jack3D is for you. I take it 20 minutes before my workout and it gives me that little extra energy, strength and stamina to ensure that my time at the gym is not wasted.…

Join TEAM CPD at the 2011 Shamrock Shuffle to honor our Fallen Officers and Firemen!

Happy New Year to everyone!

Start out 2011 on the right foot by joining TEAM CPD at the 2011 Shamrock Shuffle on 10 April AND the Run To Remember on 30 April. ANYONE can join TEAM CPD, walkers or runners! The Chicago Police Memorial Foundation will receive all of the money raised by our team at these two events. This year we will be honoring our 6 fallen Police Officers and 3 Firemen. Everyone will receive a NIKE technical t-shirt and there will be group training and fun runs…

From High Heels to Hot Pursuit...Literally 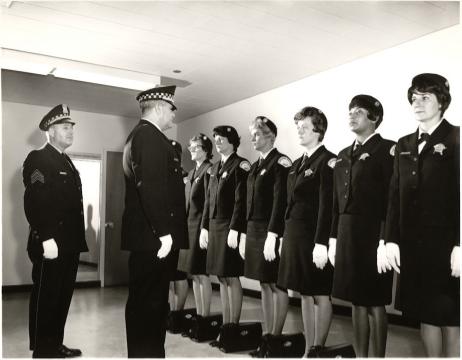 This is a photo of some of the very first Chicago Police Women in 1967. Check out the purses on the floor -- that is where they kept their guns! They also wore high heels and skirts! I am very proud to say we have come quite a long way (see picture below), keep up the good work!…

Off the hook flashlight

Recently I purchased ANOTHER flashlight, how many flashlights can one girl have?! It was the Inforce Energy Color Police LED. This flashlight is off the hook! The newest trend I was seeing on the street was the strobe feature, but the Inforce was a step up, the Inforce stood out to me for its multiple light functions. It has an output of 225 lumens, monetary or constant on, but the best feature was the…

Look Like a Sandwich You Are Gonna Get Eaten.

So I never thought that Ben Affleck would provide any sort of tactical insight but his character, a bank robber, in the movie "The Town" has a great scene. Affleck and his crew are debating taking down an armored vehicle but they are hesitant on one particular driver because he looks like "GI Joe". Affleck says the driver "wears his vest on the outside" and "tucks his pants into his boots."

A study done by the FBI, titled Law Enforcement Officers Killed and Assaulted in the Line… Continue

SWAT Round Up International 2010

This was an amazing event to attend. It consisted of training tracks, vendor show and SWAT competition. For 2011, the goal is to compete as an all or mostly female team, it will be the first time in the competition's history.

As President of the MTOA I am pround to be associated with the WTA.  I believe this association is doing great things for our sisters behind the badge in the tactical arena.  The is an area that has long been passed over and I feel that the WTA will assit to fill a void that has been forgotten for far too long.

My name is Robert and I registered on the site to pick your brains. I recognized the need for women to have tactical products specifically designed to meet their needs and their wants (A girl should have both). I am here to find a number of police/military/recreational female shooters who would be willing to take short surveys, tell me their thoughts about possible products they would like to have, and review concept art and give feedback. With any luck, you will be… Continue

I need your story

I'm writing a book that will contain true stories about female LEOs, told in their own words, the title is: Warriors in High Heels, Real Stories about Real Women. Funny stories, sad or tragic, good war stories, oddball people you've come across on the job . . . well, you know the drill. If you'd like to see your story in print, follow this link to my website: http://johnmwills.com/id13.html. Thanks, I think the book will be a huge… Continue

Jeff Chudwin and I will be teaching a basic shooting skills class through NEMRT, PHY-529R, Shooting skills for the Woman Officer. It is going to be an 8 hour class, very basic, if you or someone you know needs a refresher or some remedial help, let them know. We will be doing a 2 day class in September, not sure yet what that will entail, but I will let you know once we know.

Just thought I post some blog info about some workings here at HEAT Armor. For those of you that do not know about us, we are a Chicago based manufacturer of armored passenger vehicles. We have undertaken a new product line, one that thought would be of interest to you.

We are beginning to make a tactical SWAT truck. Pretty heavily armored, turret, gunports, all sorts of other functionality. Another company is handling the sales and marketing of it, HEAT Armor is doing the design and… Continue

Hi guys! It was great to get to meet a lot of you at Paul's class. I learned a lot and had a good time. I'm looking forward to our next training adventure.