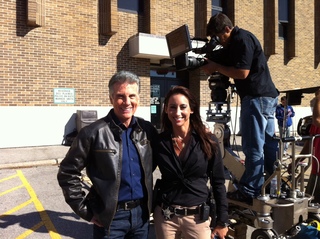 Read about Detective DePastor's personal journey and her America’s Most Wanted experience here. Tune in tonight, Friday, June 15 at 8pm on the Lifetime channel, to watch her America's Most Wanted episode.

Below is a flyer with more information on the offender – be sure to take a look and spread the word – especially here in Chicago.

JD - I am a Detective with Des Plaines (a a suburb of Chicago) PD - appointed in May 1997. As with a majority of other towns, Des Plaines PD has had to take some cuts in personnel. The detective bureau is down to only 8 detectives. I am the head detective and the only female!

Des Plaines PD has about 45 patrol officers, 3 more in our tactical unit, the rest are sergeants, commanders and above. Des Plaines has a population of almost 60,000 - we see all sorts of crime! From murders to “someone stole my lawn jockey!” not kidding…..Plus with the new Rivers Casino, things have a gotten slightly busier!

Talk  about your education and career path within the Des Plaines PD.

JD - I was hired at 22 years old on April 9th, 1990. Yes, if you do the math it equals “old dog” or “salty” like the old timers used to say. My first few days back from the academy were not exactly pleasant as the real salty dogs had no problem telling me to go back to where ever I came from….ahhhh the memories!

Anyway, I worked hard-sometimes too hard as I was told numerous times to “slow down” or have had my radio traffic trampled on…Really???

So, after about 3 or so years, became an FTO then was moved to the undercover/gang unit for 2 years then to Detective.

I am a member of the Internet Crimes Against Children Task Force (ICAC), and an active Intel officer for our Tactical Response Team.

Tell me about the case on America’s Most Wanted and your role in the case.

JD - November 30th, 1999, we had gotten a 911 call of a woman banging on neighboring apartment doors screaming that her roommate was dead. I happened to be close by and responded to the scene thinking it’s another drunk passed out or a minor medical condition being blown out of proportion. Needless to say I was wrong big time!

A United Airlines Flight attendant, Young Kavila, had just arrived at her “crash pad” for the night. She was raped and had her throat slit from ear to ear by someone unknown. Her roommate and fellow United Airlines Flight attendant is the one who found her. Being a detective for about a year and a half and only assisting on previous murders, my supervisor put the upmost faith in me and handed me the case.

The victim fought for her life by using a small, nail grooming tool that is basically a razor blade and cut the offender severely across his chest and abdomen area.

We were able to determine from DNA on scene that the offender was a male of Mexican descent.

We had called to have the case aired on America’s Most Wanted, but since we did not have a face to the offender, they said no.

We worked for years on this murder. We swabbed every male that lived in a 10 mile radius of Young’s apartment complex as well as other flight attendants, pilots, passengers on her last flight and sent over a hundred swabs to the ISP lab. My DNA people at the lab were awesome!!! To say we all became very close would be an understatement! Unfortunately, no matches on any of the DNA specimens.

It just about killed me when I boxed up my notes to put away as a cold case not ever looking to be solved when in 2007 a family member of Luis Rodriguez-Mena came forward to say “He did it.”

Yes, I cried. Everything she said right down to the horrible scarring across his chest was a match. Mena lived 30 yards from Young’s apartment fleeing to Mexico 6 hours after the murder.

After interviewing this family member, I was able to track down Mena’s girlfriend, Yenny from 1999 and learned she had a child, a son, with Mena.

I went to her address in Chicago and interviewed her. As she explained her years of abuse and terror with Mena she told me she ran for her life and the life of her child now 10-years-old after he almost killed her when they lived in Mexico.

I met Luis Jr. and collected his DNA. 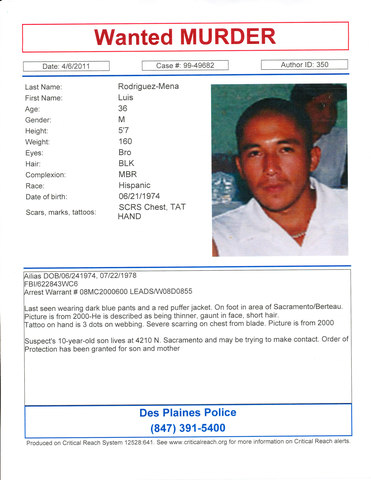 I had to send the sample to a private lab which as you can imagine the wait was pure torture, but the results were exactly what I had hoped for. Luis Jr.’s father, Luis Rodriguez-Mena, was a match to the DNA left on the scene.

I got my arrest warrant, the FBI got their Unlawful Flight (UFAP) warrant and……nothing…..crickets….How my whole head isn’t gray I have no idea (yes I do, Feria Espresso Brown).

It wasn’t until last October that the Chicago Tribune “Watch Dog” Reporters, David Jackson and Gary Marx called wanting to do a piece on the Kavila Murder. They have been working on “how illegals can come here, commit heinous crimes then run back to their prospective countries and no one goes to get them” stories.

They interviewed me and Yenny (she was kept anonymous) and the article ran in the Chicago Tribune on Dec 28th, 2011.

America’s Most Wanted caught wind of the Kavila case through Gary and David and they contacted me. The producer explained that they were doing a special called The World’s Most Wanted” and wanted this case on it.

I explained that Mena had dropped off the Mexico map in 2008 but was seen in Chicago by various sources in March 2011.

The producer, loving the fact he could be here and that I was a FEMALE…talked to her bosses and the rest is history as they say.

Talk about your experience on America's Most Wanted.

JD - The producer who called me, Hannah Buchdahl, came out in May to do the interview. She was awesome! I was a little nervous but the camera crew from Big Shoulders right here in Chicago were so much fun I relaxed immediately!

Two long days of filming with just Hannah at the police department and at the crime scene. I was exhausted! Who knew?

Yenny was also filmed but she was shadowed to conceal her identity. Her story was so moving. I don’t think any of us had a dry eye.

After Hannah brought the film back to AMW headquarters in DC, John Walsh saw it and had to be a part of it. So the man himself came down last week and spent a day filming here!

I see all these equipment trucks and this enormous RV parked in front of the PD. I’m thinking about how big his ego is going to be…WRONG again!

John Walsh could not have been nicer! Talk about the most down to earth, humble guy! So appreciative of all police! He didn’t turn down anyone who wanted to say hi or take a picture. It was truly an honor meeting someone still so passionate and so dedicated to the cause!

My same camera crew was out and we spent the day filming outside and in the bureau. A few bloopers later and we have a final product!

This case has touched so many lives including AMW and crew. I really hope this is the break we have all been waiting for. My bond with Yenny has grown over the years as it was almost impossible for it not to happen. I just want to be able to tell her that she doesn’t have to look over her shoulder anymore.

Why did you join the WTA?

JD - I mentioned before not knowing if I “fit in” to what I perceived the WTA to be. Meaning I saw these beautiful, tough, skilled CHICAGO police women and here I am in suburban Des Plaines blowing the dust off my gun figuring I could never live up to this amazing club.

Then as I watched women from all over join as well as my fellow ICAC team mates, I jumped in! Now I just have to take the next step which is getting my butt to some courses! (Or to the next Vegas trip-purely to educate myself….)

Even though we as police women have put the proverbial cracks in the glass ceiling in police work, I still feel the need to have that very support that only women can give each other. I thank you for creating such a place!