Henk Iverson's Advanced Concealed Carry class incorporated elements from four of his six CQB Pistol levels, only the idea was that you were using your EDC pistol and were drawing from concealment.  It was cold out those two days, which was a good learning experience.  Drawing from concealment with multiple layers on in cold weather is something most people that carry concealed don’t practice often, if ever. concealed carry.  As an on-duty Police Officer, personal space is an unspoken, but well understood concept and the vast majority of people will go well out of their way not to violate the personal space of a cop.  That is usually not the case as a plainclothes “citizen”.  Whether walking down the street, buying popcorn at a movie theater, or picking out steaks in the grocery store, personal space has a different definition and is routinely violated without consequence.  People have the idea that if they had to use a firearm off duty or as a concealed weapon carrier, it would be against the armed robber that is 30 feet away, or they would see the attack coming and have ample time to draw their weapon.  This may be the case where the violence is directed towards someone else, but if the violence is directed at you, there may not be much warning.  That is why it is so important to pay attention to what is going on around you.  Don’t be paranoid, just be nosey.

Once out on the range, we practiced drawing pistols when concealed by the fleeces and jackets we were wearing, as well as retrieving mags to reload.  It took a little more time than I was comfortable with, retrieving a reload magazine dressed as I was.  I had a fleece under a down jacket and the first time I went for a magazine, I pulled up the outer jacket but missed the fleece jacket underneath and it took two swipes to clear the magazine.  The same can happen when you have multiple layers over your pistol.  A slight tuck of the fleece behind the pistol remedied that, so when I pulled up on my coat, the pistol was exposed and the fleece wasn’t in the way.  I also added a second backup magazine in my support side coat pocket, which worked fantastically.  As a good friend of mine says, “The only time you can have too much ammo is when you are on fire, or swimming.”

We then practiced drawing from different locations of concealment with different coats, zipped, unzipped, etc.  Henk presented and discussed carrying concealed in an appendix location, behind the hip, small of back, ankle holster, shoulder holster, etc, the benefits and merits to some, and the disadvantages to others.

Once shooting we worked on grip and made a few tweaks that significantly reduced muzzle movement for a lot of shooters so they were able to get back on target and deliver follow up shots faster and more accurately.

Next, we incorporated movement as we were employing empty hands. 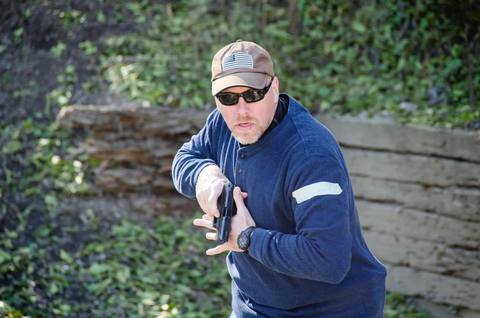 Henk used several demonstrations to illustrate the importance of movement to steal time back from the bad guy, get closer to cover, get closer to the threat if that is appropriate, and what kind of movement.  Once shooters got the hang of that, we were moving, drawing, shooting, and scanning our surroundings.  I’ve been to several of Henk’s classes and it didn’t take me long to learn how to play, “Where’s Henk.” We then progressed to dealing with multiple offenders.  Moving off the line of force, engaging multiple offenders, and then moving back to a position behind cover, making sure to not blindly take the corner, but get there fast, and without pointing your pistol at people you don’t want to shoot.

We addressed drawing, shooting, clearing malfunctions, and reloading, all one handed.  First, the above were done one handed strong side, then one handed support side.  Several shooters discovered that on the move, one handed manipulation of a “concealed carry” pistol was difficult with smooth, snag-free, sights.  On a side note, I’ve found that practicing one handed shooting during the day is a great way to improve your low-light, night shooting when holding a flashlight.

We also practiced shooting at longer distances, up to 50 yards.  We started at 25 yards and worked our way back to 50 yards a few steps at a time, then came back forward to 25 yards.  Most shooters improved their groups the second time we visited the 25 yard line, since it seemed so much bigger than it was back at 50.  With smaller, concealable pistols, it was difficult, but several people were surprised that when they did their part, the pistols were significantly more accurate than they expected.  This is the part where readers will say that if the threat is 50 yards away, that affords plenty of time and space to get the hell out of there.  The exercise was not to encourage us to engage offenders at that distance with shorter sight radius pistols, but to illustrate just how accurate the smaller guns can be and as with anything, a little practice goes a long way.  A S&W Shield was the smallest pistol in the class, with several M&P Compacts, Glock 19s, Commander 1911s, etc.  It is a skill that is acquired more easily than one would think and who knows, someday your pistol may need to be your rifle.

We ended the day shooting through windshields and car doors, which is always fun. 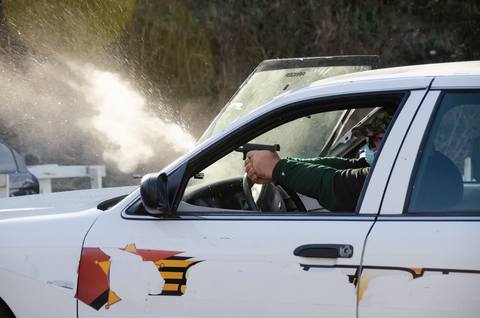 Illustrating to people just how easily bullets go through cars is a valuable and fun training point.

There were many valuable holster lessons learned that day.  Holsters need to stay open when the pistol isn’t in it.  J-hook holsters not only need a belt to hook under to work properly, but they need to be hooked over properly fitting pants.  A J-hook holster with pants that are too big in the waist, regardless of how your belt fits, is a recipe for having the holster come along with the pistol on the draw.   One shooter’s IWB holster had metal clips that clip over the waistband of the pants and belt, and it kept coming along for the ride when the pistol was drawn.  A quick modification to the shape of the metal clips remedied that though.  The shooter was happy to have encountered and remedied that situation on the range. 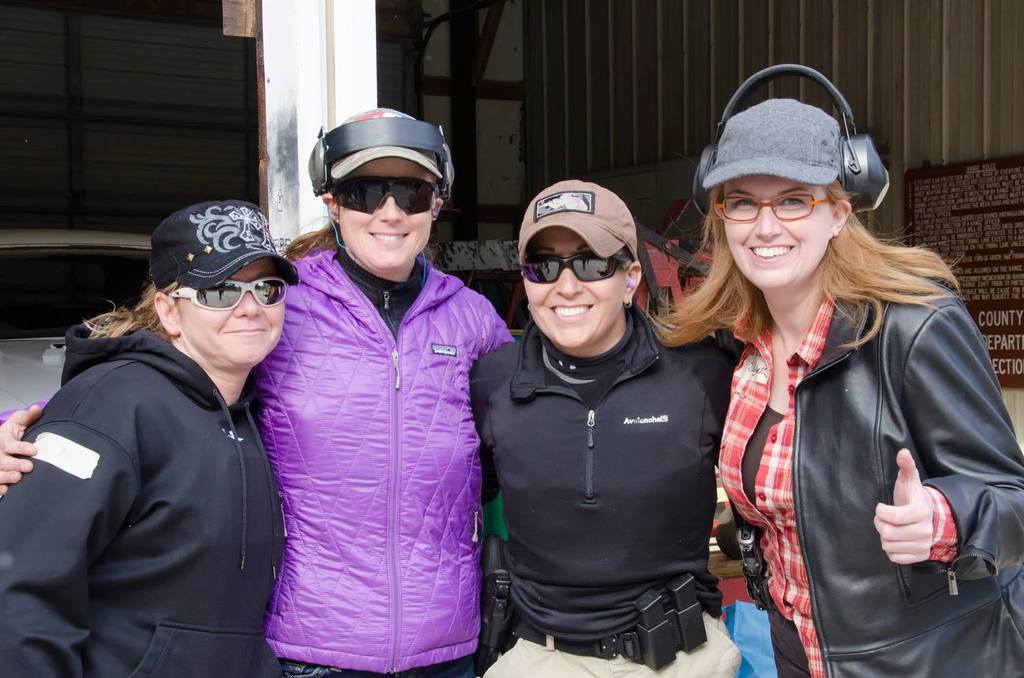